The APRS packet path is used to control the distribution and retransmission of a packet in the APRS network.

Every now and then someone asks how paths actually work. Having spent quite some time staring at packets that have been digipeated, and decoding them at my little aprs.fi web site, I suspect I might have begun to understand it, so here goes. I'll explain it the long way and begin with a packet without a path, continue with the traditional AX.25 digipeating path, and then go to the APRS world.

Let's assume my call is N0CALL, and I have a generic APRS device which uses the generic APRS tocall (destination callsign) of APRS. The packet, without any digipeaters or path, in the usual text format, as used on the APRS-IS, would look like:

There are two separating characters: the '>' separates the source and destination callsigns, and the ':' separates the packet header from the actual data being transmitted (the APRS formatted position, in this case). A packet like this would not be repeated through any digipeaters, but it could still be directly heard, picked up by an iGate and passed to the APRS-IS on the Internet. Sometimes you might want to do this and configure your transmitter with an empty path.

The digipeater path may then optionally appear after the destination callsign. Here's a packet that I might transmit, which requests digipeating via two specific digipeaters, in a particular, specified order:

Here, the digipeater path is OH7RDA,OH7RDB - the packet should be digipeated by OH7RDA and then OH7RDB. This is how classic AX.25 packet radio digipeating works. APRS is transmitted using AX.25 packet radio packets, so they will follow the old AX.25 rules too. You can certainly do this and most APRS digipeaters will digipeat your packet if you just put the callsign in the path.

Each digipeater will look for the first digipeater callsign in the path which has not been used yet (i.e. the "has been repeated" bit is not on - there's no "*" in there), and then figure out based on that if it should be retransmitted. So, after OH7RDA has retransmitted the packet, and OH7RDB has heard the above packet with OH7RDA*,OH7RDB in it, it will go "oh that's my callsign, I'll retransmit". The resulting packet transmitted by OH7RDB will have OH7RDA*,OH7RDB* as the path! Note that OH7RDB will not retransmit the original packet before OH7RDA has done his part.

To add confusion, and to save a few bytes, usually only the last "*" is usually printed, although the "has been repeated" bit is set on all previous digipeater calls. OH7RDA,OH7RDB,OH7RDC* actually means OH7RDA*,OH7RDB*,OH7RDC* !

Digipeaters can be also configured to respond to alias callsigns in addition to their own call. For example, OH7RDA could be configured to repeat a packet which requests digipeating by ALIAS. It may then do one of two things: It can either substitute ALIAS with it's own callsign, or prepend it's own callsign before ALIAS. This varies by digipeater software and its configuration.

When retransmitted by OH7RDA, will become one of:

The benefit of the second format (digi call prepended) is that, upon receiving such a packet, we know that the originator used ALIAS as the path.

In the classic/old APRS digipeating world, people used aliases like WIDE to ask for any digipeaters to digipeat. Currently, this method is used to digipeat through satellites and the ISS - just use a simple alias of ARISS as the path and it will be digipeated through the RS0ISS digipeater on the ISS or any of the other APRS-supporting satellites on 145.825 MHz! Yes, this means the PATH setting should be just "ARISS". Do not put any of the WIDE or RS0ISS stuff in there, it won't help.

This is where it gets interesting and more specific to APRS, as these paths only work on APRS digipeaters. A WIDEn-N path has two integers, n and N. WIDE3-1 would have n of 3, and N of 1. The first integer theoretically means "I'd like to have this packet to be digipeated by this many digipeater hops" (3 in the example of WIDE3-1). The second integer means "there's this many hops left before digipeating stops". When it becomes 0, it won't be digipeated any more, and the "has been repeated" bit will be set (a "*" will appear).

A packet with a path of WIDE3-3, after first retransmission will become WIDE3-2, and then WIDE3-1, and after the third retransmission it'll be WIDE3*. The SSID of 0 is not printed – it's really WIDE3-0 under the hood of the packet but the -0 will not be shown.

The digipeaters supporting this kind of alias usually also prepend their callsigns (all the good ones do, the bad ones don't). And the packet will be often picked up by many digipeaters! So you may see something like this, when both OH7RDA and OH7RDB hear N0CALL, and OH7RDC hears OH7RDB:

You can also send a packet which originally has a path of WIDE2-1, and it'll be digipeated by digipeaters which are configured to respond to the WIDE2 alias - but only once, since the "remaining hops" number is 1 to begin with. If three digipeaters can hear you, this would result in:

A packet of WIDE2-2 is often retransmitted by much more than than 2 digipeaters, since it will be digipeated twice to each direction. Each high-level digipeater in a tower will be often heard by a few digipeaters which are actually quite far away. This is how a WIDE3-3 path might be distributed through a whole country, and a bit to the neighbouring countries as well (rough example but not far from the truth): 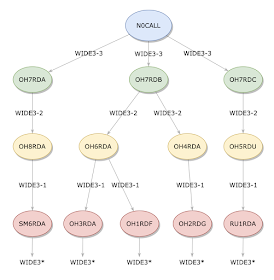 This is why we don't usually use paths with more than 2 hops on APRS, and practically never more than 3 (except in some specific cases in rural areas with quiet channels having little traffic). A packet like this can light up the whole APRS network in almost the whole country (or a few states, for you in the larger nations). If a lot of people did this, the channel would become too congested and APRS would stop working as everyone would be transmitting on top of each other. It has happened and we've learned it the hard way.

The idea is that the fill-in WIDE1 digipeater may well hear packets from nearby transmitters, which might be missed by the higher-up digipeater – due to distance, or because it hears a lot of stations and gets a lot of collisions, or because there are "urban canyon" obstructions. The wide-area-coverage WIDE2 digipeater will be heard by everyone, and there's no need for the fill-in WIDE1 digipeaters to retransmit packets which have already been transmitted by it!

This is accomplished by transmitting a packet with a WIDE1-1,WIDE2-1 path. This is the usual recommended default APRS path, as you might have noticed. It would be first digipeated by any digipeater (fill-in or wide-area), and then by a wide-area WIDE2 digipeater. But only for a total range of 2 hops! This is how it might look, if you could receive the original packet and all the digipeated packets - N1FILL is the fill-in home digipeater, OH7RDA and OH7RDB are higher-up digipeaters which can hear N1FILL but not N0CALL:

In reality, many of these fill-in digipeaters are old and dumb TNCs, and can not do callsign prepending. Instead, they just do callsign substitution and replace WIDE1-1 with their own callsign, like this:

Alternatively, if N1FILL would not receive this packet, but just the higher-up digipeaters directly, then it might go a bit further. OH7RDA heard N0CALL, and subsequently OH6RDA and OH8RDA hear OH7RDA:

To send a packet for one hop of digipeating you can choose to use either WIDE1-1 or WIDE2-1. With WIDE1-1 you may have it digipeated through fill-ins and wide-area digis, a WIDE2-1 should only trigger the wide-area ones.

There are also some buggy digipeaters out there which do not add their callsign at all - they just retransmit, and decrement the hop counter of a path element (WIDE2-2 to WIDE2-1 and so on). These are particularly annoying when trying to figure out what happened to a packet.

What about the ,qAR,IGATECALL stuff happening on the APRS-IS?

The q construct does not appear on the radio side - it is only used for tagging additional information to it on the Internet.

Digipeaters often have policies or filters configured, to prevent digipeating of outright silly paths like WIDE6-6, or paths with a big combined hop length ("WIDE1-1,WIDE2-2,WIDE3-3,WIDE3-3" for a total of 9 hops), or paths where the second integer is larger than the first one (WIDE1-7). Paths like this are considered abusive and cause excess congestion to the APRS network.

Having said that, I think it's alright to have some fun sometimes!

One fun trick is to send a packet, manually, by hand, towards the west, have it travel around the country and then come back to you from the east. You can accomplish this by drawing a map of live digipeaters (aprs.fi can do this for you), and then putting in the callsigns of the digipeaters in the path (up to 8 digis may work): DIGI1,DIGI2,DIGI3,DIGI4,DIGI5. Even though they are many elements in the path, it won't consume much more radio channel time than what a WIDE1-1,WIDE2-2 packet would. Just don't do this with the regularly-beaconing APRS tracker in your car, it'd be silly.
Hessu at Saturday, February 01, 2020
Share